Searching For The Cause 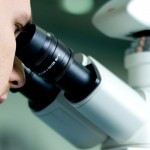 Picture if you will, a small inland lake. This lake is pristine, but all of a sudden, out of nowhere, the fish begin dying for no apparent reason! Scientists are rushed in to diagnose the cause of these deaths. They find that their hearts are beating much too hard and they have far too much fat circulating in their blood. There is also a large percentage of fish swelling up to double their normal size and have tumors all over there body.

Now, the scientists immediately begin treatment on test groups. They find that if they stop the fish’s ability to create fats in their blood and their hearts from beating too hard, they do not die as quickly. Those who doubled in size were given a medication that stops prevent these tumors from growing or perform surgeries on more progressive tumors.
The scientists claim success! Medical science has saved this population of fish from certain death! However, these fish are unable to thrive. The average lifespan of the fish had improved from when the scientist first arrived, but the fish were no longer thriving, they were no longer swimming around, playing games with each other, and they had unable to reproduce like they once had.

Then, one day, a child was fishing upstream from the lake, and found a tire peeking out of the water. He told his father, who then investigated it and discovered an overturned truck under the water. This truck was full of toxins, chemical, and pollutants that were slowly leaking into the water, and in turn into the fish. “This must have been what caused the fish to get sick in the first place!” he exclaimed. The truck was removed, and again the fish began to thrive (other than suicidal thoughts, dry mouth, and nauseousness, a few side effects from the medications they were taking).

You see, the fish did not have a medication deficiency. There was something present in their environment causing dysfunction. Thanks to modern medicine, the scientists were able to keep the population from dying as quickly as they otherwise would have. But the actual cause was not addressed until the truck was removed! That is what modern medicine has become, a hunt for the most effective band-aid. Metformin will not address why your blood sugar is getting too high, it will only keep it lower until the cause of the original problem has gotten so bad that insulin is necessary. Prilosec will not correct the cause of your stomach not keeping acid from irritating your esophagus (“heartburn” or GERD). It will only make it feel better while your body continues to not break down food properly.

If you are okay with living with a band-aid, you have come to the wrong place. We are searching for the cause of your body’s dysfunction. We are eliminating that which has allowed your body to break down, and are allowing your body to restore its health without these bandaids. There is no way that this can be done without a huge effort on your part, so get ready to reclaim your health once and for all!

“The individual who says it is not possible should move out of the way of those doing it.”